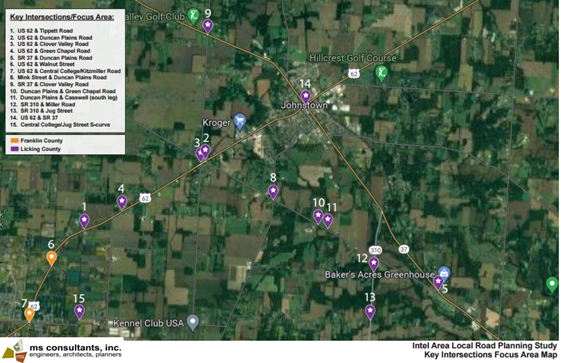 The Licking County Transportation Improvement District (TID) previously reported it was taking the lead for the County to evaluate the future traffic demands on local roadways–county and township roads.  These rural roadways will deliver employee and shipping traffic between the state routes to the north and east of the new Intel roadways will be the focus of the TID study. New traffic created from outside the Intel area that will be occurring from residential and commercial growth will also be considered.

The TID received the good news in June that their grant application to the ODOT Division of Jobs and Commerce was approved in the amount of $500,000 for consulting services to perform a traffic study to identify the best use of future construction funds and the level of improvements required on each of these roadways.  The study has since grown into a jointly funded effort with the Franklin County TID.  It was recognized that a merged study would result be more efficient since redundant traffic analyses would be avoided, and a better, more comprehensive traffic model would be gained.  The intersections and road segments in Licking and Franklin Counties being evaluated are shown in the figure above.

The TID also applied for a federal roadway improvement grant through the Community Projects Program to be used for the identified future roadway needs.  The TID received more good news in June when Congressman Balderson announced that the project received preliminary approval for $2 Million in construction funding.